Today marks the final day of the 2022 MLB regular season -- yes, it falls on a Wednesday this year -- before the MLB playoffs start Friday afternoon.

While there might not be a whole lot left to determine in the standings with all 12 postseason spots filled before teams take the field for Game 162, there are still plenty of reasons baseball fans everywhere should tune in one last time -- whether your team has punched one of those playoff tickets or will be playing for the last time until Opening Day arrives March 30, 2023.

With that in mind, we asked our MLB experts to find the one thing they are most excited to see play out on the last day of the regular season.

Bradford Doolittle: I'm zeroed in on the extremes: What will our final tally of 100-win and 100-loss teams be? I'm watching this because the disparity across baseball seems to be getting worse. I thought that might change this season as the spate of recent rebuilding teams, like the Baltimore Orioles, began to turn the corner. But I was either flat out wrong or premature to have that hope.

It's still possible for us to have five 100-win teams this season. There has never been more than the four we had in 2019. We could also have four 100-loss teams. That would be just the fourth time it's happened in history, but the third consecutive full season. And if all those 100-something scenarios come together, that would be nine teams in triple digits in either wins or losses. The record is eight (2019). Nine teams. Nearly a third of the big leagues.

Alden Gonzalez: Here's the National League leaderboard for FanGraphs wins above replacement heading into the final day: Manny Machado, 7.3; Nolan Arenado, 7.2; Paul Goldschmidt, 7.1; Freddie Freeman, 6.9; Francisco Lindor, 6.8; Mookie Betts, 6.6. For a while it seemed as if Goldschmidt and his Triple Crown pursuit would run away with the NL MVP, but he has slumped of late, slightly opening the door for others. One game won't -- or, at least, shouldn't -- make the difference for such a significant, season-long award, but any little bit helps right now. This race suddenly seems a lot closer than we might have thought, even if you don't consider WAR your be-all, end-all measure. 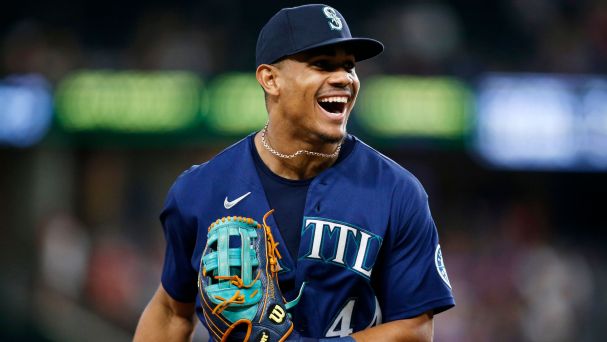 Eight teams will take the field this weekend. Only four will make it to the division series. Watch every wild-card series matchup from Friday through Sunday on ESPN and ABC.

Buster Olney: Every at-bat of Julio Rodriguez's is a must-watch because he's the most important guy in the Seattle lineup, and if the great story that is the Mariners is going to continue, then J-Rod needs to find his timing quickly as he comes back from the back issue that forced him to the injured list.

For years, the Boston Red Sox were the franchise that fought decades of frustration, and then, after they won the World Series, the Chicago Cubs became the team most in need of a postseason breakthrough -- and if Cleveland is No. 1 on that list now, the Seattle Mariners are No. 2. Since 2001, they've had great players like Ichiro Suzuki, Felix Hernandez and Robinson Cano. Ownership has spent money in an effort to win -- to reward what is a passionate fan base -- but they just haven't gotten it done.

Now there is potential for them to take a big step forward, and that can only happen if Rodriguez is healthy and productive enough to drive a modest offense.

Jeff Passan: For the final act of his dazzling 2022 season, Shohei Ohtani will take the mound and start as designated hitter against the Oakland Athletics. They are the worst team in the AL and, as a team, are hitting around .220 with an OBP just over .350 since Sept. 1. Ohtani, meanwhile, is in the midst of a four-month stretch in which he's been the best pitcher in baseball -- and with one more inning, he'll become the first player in history to qualify for the batting and ERA titles in the same season.

With the Los Angeles Angels doomed to another October of playoff-free baseball -- the only sort Ohtani has known in his five years in MLB -- don't miss the full Ohtani experience. In his last start Thursday against the A's, Ohtani went eight shutout innings, allowed two hits, struck out 10 and went 2-for-4 with an RBI.

Can you compare Judge and Ohtani? 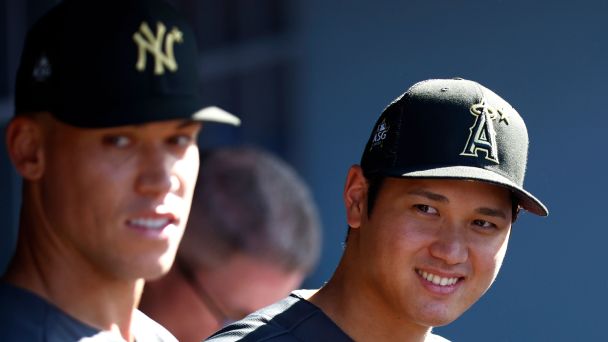 Both stars are MVP contenders but radically different players. How do they stack up to one another?

Jesse Rogers: Batting average isn't sexy, right? How about when two teammates have a chance at hitting .300 in their first seasons in the big leagues? Is it more interesting now? Cleveland Guardians outfielders Steven Kwan and Oscar Gonzalez could become just the second pair of rookies from the same team (Pittsburgh, 2019) to accomplish that feat since 2000. Both are hovering at the .300 plateau going into the final game.