The fact that there is a division title hanging in the balance as the New York Mets and Atlanta Braves meet this weekend might come as a surprise for anyone who was watching the National League East standings earlier this season. What was once a 10.5-game lead for New York in early June and still as large as seven games on Aug. 10 has turned into a down-to-the-wire battle, with both teams chasing 100 wins in one of the best division races of the wild-card era.

But while Mets fans are likely a tad stressed by this stretch run, especially after dropping the first two games in Atlanta, their star first baseman begs to differ.

"This is fun -- this is really, really fun, being in a race like this," Pete Alonso said Tuesday after a Mets loss and Braves win briefly tied the teams for first place.

Luckily for baseball fans, the two teams square off one final time Sunday night (7 p.m. ET on ESPN) after Atlanta took the first two to grab a one-game lead in the standings.

The series is the biggest of the 2022 regular season, about as big as you can get in this new 12-team postseason world -- and, arguably, the most important regular-season series since at least 2012 (more on that in a minute).

Yes, both teams have clinched playoff spots, but given the ramifications of winning the division and receiving a first-round bye compared to having to use your best starters out of the gate in a best-of-three wild-card series -- where anything can happen -- both teams desperately want to win the division, and which one does will shape the shape the entire MLB postseason.

"The hope is to have a good series against New York this weekend," Braves outfielder Ronald Acuña Jr. said Tuesday. "The division is on the line."

One advantage for the Mets going in has disappeared because they lost the first two games: They led the season series 9-7, so they needed to win only one of the three games to clinch the season series, which would give them the tiebreaker edge and the division title if the two teams finish with the same record (tiebreaker games have sadly been eliminated). Now, Sunday night's matchup will determine who has that edge -- and a huge advantage in securing the NL East crown over the final days of the season.

Simply put: If Atlanta completes the sweep, the Braves will have a two-game lead with three games left and would win the division if the two teams finish the regular-season tied. But if the Mets win Sunday, the two teams will be tied, and New York would win division if they remain so when the season ends Wednesday night.

Outside of eliminating the risk of having your season end three days into the playoffs, the biggest key in avoiding the wild-card series is what it does to your rotation for the next round -- especially since there are fewer off days in this year's postseason after the schedule was condensed because of the lockout. The best-of-five division series, for example, will be played over a potential six days rather than seven.

Here's how the Braves playoff rotation lines up if they don't win the division:

Then if they advance, in the division series:

We've got you covered this October with the latest schedules, results, news and analysis.

Now, the Braves are holding out hope that Strider can return in the postseason, although given the nature of oblique injuries, that feels a little ambitious for at least the first couple of rounds. But you can see the impact: If you have to play in the wild-card series, and are fortunate enough to move on, you're going to end up using your No. 3 or 4 starter twice in the division series if it goes the distance. That's an even bigger deal for Atlanta if Strider is sidelined and it's the rookie Elder or the struggling veteran Odorizzi making that extra start instead of Fried.

The Mets have a deep rotation as well, but they would certainly prefer deGrom lined up to start twice in the division series:

Then in the division series:

The one caveat here is it's possible the Game 2 starter could come back and start Game 5 on three days of rest. That's rarely done these days, however, and even last postseason when Morton broke his leg in Game 1 of the World Series the Braves elected to give starts to Tucker Davidson and Dylan Lee rather than pitch anybody on short rest.

Playing in the Wild Card Series isn't necessarily a sentence to an early exit. The Nationals won when it was a single game in 2019 -- in which they used both Scherzer and Stephen Strasburg -- and ended up going all the way. (It did help that the NLCS was a four-game sweep, giving their staff a few extra days of rest heading into the World Series.)

But there's another incentive to avoiding the wild-card series: which side of the bracket the division runner-up will end up in. The division winner will be the No. 2 seed in the National League and play the St. Louis Cardinals or the third wild-card team (most likely the Philadelphia Phillies or Milwaukee Brewers) in the NLDS. The division runner-up gets the No. 4 seed, would have to play the San Diego Padres (the likely No. 5 seed) in the wild-card round -- and then the 107-win (and counting) Los Angeles Dodgers in the NLDS, having just used their top two starters to get there in the first place. 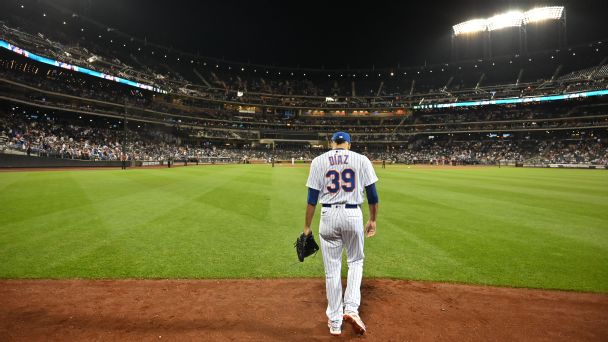 Here's why there's nothing else in sports quite like the moment a shutdown reliever's music starts up with the game on the line.

The Undertaker, 'The Wire' and Timmy Trumpet »

Winning the division also delays starting the clock on the fatigue factor for your pitching staff. While you will hear some mention that the days off between the end of the regular season and the start of the division series can hurt a team -- this year, that would be five days -- there is no evidence that's the case. But giving at least your top two starters one fewer start and some extra days off? That sounds like a very good thing in today's max-effort pitching world.

Look at what happened to the Dodgers last season: They lost that epic NL West race to the San Francisco Giants and started Scherzer in the wild-card game, which meant he couldn't start again until Game 3 of the NLDS against San Francisco. With the Dodgers down 2-1 in the series, Walker Buehler started Game 4 on short rest and then they used Julio Urias and Scherzer in relief in Game 5.

You can debate some of Dave Roberts' choices there, but after starting Game 2 of the NLCS against the Braves (two days after his relief appearance) and lasting just 4⅓ innings in a game the Dodgers lost, Scherzer came up with a dead arm and was unable to start Game 6 of the series -- which Buehler started again on short rest and pitched poorly as the Dodgers lost and went home.

Bottom line: The less scrambling you have to do with your staff, the better -- and, again, this year's schedule makes it more difficult to do what the Dodgers tried to do last year anyway, which was use their three healthy starters and bullpen their way through the fourth spot in the rotation (or use somebody on short rest).

Which team would benefit more from the bye week, allowing some extra rest for their pitchers? I'd probably say the Mets, given the health issues deGrom -- including a blister popping up during Friday night's start -- and Scherzer have had this season. Plus, deGrom is coming off his worst start since 2019 with the lowly A's tagging him for five runs in four innings. This is an extremely small sample, but note his ERAs this season entering the series:

Scherzer has good ERAs at all three levels, but check out his OPS and strikeout-to-walk ratio:

Seems like getting them a little extra rest could be a big deal in how far the Mets go.

So we're set up for a big series. Now back to my statement of the biggest regular-season series in a decade. I went back to the start of the wild-card game era in 2012 and checked out the tightest division races each full season (no, wild-card races don't count) and the records heading into the final series those teams played against each other. Here are the closest comparisons.

Who has the most talent locked up?

We've sorted the teams with the most star power under control through 2024.

An epic race, but the final matchup came early in September -- the two didn't play each other in their final 25 games.

This was the season we ended with two division ties, as the Dodgers and Rockies both finished 91-71 in the NL West. The Brewers won their final eight games (including the tiebreaker) to finally catch the Cubs, but the two clubs last played Sept. 10-12.

The Red Sox were three up on the Orioles when they started a four-game series on Sept. 19. The Red Sox took all four to essentially wrap up the division.

St. Louis and Pittsburgh did meet in the next-to-last series of the season. The Cardinals won the first game and then after a rainout they split a doubleheader, clinching the division for St. Louis.

The Tigers took the first two games of a three-game series and held on to win the division by one game.

Breaking down the next generation of stars to reach baseball's most iconic offensive milestones when sluggers Miguel Cabrera and Albert Pujols retire.

The Cardinals swept a three-game series and never relinquished the lead, winning the division by three games.

Finally, a series to rival this Mets-Braves matchup -- although the two clubs weren't quite as strong. They met in Oakland for the final series of the season and the A's took all three games to capture the division.

So there you have it. This Mets-Braves series tracks as the important regular-season series since at least 2012 -- and since these teams are better than the A's and Rangers, it feels even bigger than that one, even if both teams have another series to finish the season.

There are big names and big stars. It involves two of the top franchises in the sport. The implications also go beyond just New York and Atlanta -- like, to Los Angeles, where the Dodgers probably aren't too anxious to face deGrom and Scherzer in a best-of-five series. Alonso is ready. I can't wait to see how Acuna and Austin Riley and Michael Harris II perform in these big moments. This is baseball at its regular-season best.