I remember reading once something along the lines of, “Most pitchers who reach the majors would be good if they could stay healthy.” There’s something to that: Half of the battle is simply getting to the mound with your ligaments intact and your shoulder not burning or your back not hurting.

Matt Harvey wasn’t just a good pitcher. At his best, he was a great pitcher and, for a short time, maybe the best in the game. After making 10 starts as a rookie for the New York Mets in 2012, he dominated out of the gate in 2013. In his seven starts, he posted a 1.28 ERA, struck out 58 in 49⅓ innings, allowed just two home runs and limited batters to a .133 average. The final game of that run was a one-hit shutout with 12 strikeouts against the White Sox, the only baserunner Alex Rios’ infield single in the seventh inning. He didn’t get the win because the Mets didn’t score until the 10th, but it was a masterful performance:

The All-Star Game was at Citi Field that year and Harvey started for the National League, throwing two scoreless innings. The Dark Knight was the toast of New York, a pitcher with a big fastball and the brash confidence New Yorkers love. He posed sans clothing for ESPN The Magazine and did a funny skit for Jimmy Fallon asking people on the street what they think of Matt Harvey.

Harvey underwent Tommy John surgery later that season, missed all of 2014, then returned to help the Mets reach the World Series in 2015. He pitched well that season, which included the controversy over a Harvey innings limit, and ended up throwing 216 innings, including the postseason. That’s considered a lot for a pitcher coming off Tommy John surgery (although Harvey had a longer layoff than most), and his final outing was Game 5 of the World Series, when he took a 2-0 lead into the ninth but couldn’t hold the lead.

He was never the same after that and had another major surgery for thoracic outlet syndrome. The pitcher who allowed just seven home runs in 178⅓ innings in 2013 allowed 21 in 92⅔ innings in 2017. The velocity was down, the breaking stuff lacked the same bite, and his reputation was permanently damaged when he missed a game after being seen out on the town at 4 a.m. the night before and suspended by the team.

Now he’s a member of the Cincinnati Reds, traded for catcher Devin Mesoraco and cash. The deal makes sense for both teams. The Reds began Tuesday with a 5.60 rotation ERA and the worst record in the majors. They have nothing to lose and if they can build Harvey back into something usable, they could then turn and flip him to somebody else. Of course, rebuilding your game at Great American Ballpark when you’ve already had problems serving up home runs won’t be easy.

The Mets, meanwhile, get some catching to help them in the wake of injuries to Travis d’Arnaud (out for the season) and Kevin Plawecki. Mets catchers are hitting a combined .164/.276/.245, so Mesoraco -- who has battled his own injuries -- should get an opportunity to play a lot.

Joe Sheehan, in his newsletter on Monday, pointed out that the Mets essentially chose Jason Vargas over Harvey, even though Vargas had been even worse in his first two starts. He had another bad one on Tuesday, allowing four runs in four innings, and now has allowed 26 hits and 19 runs in 12⅓ innings. Joe wrote,

It could be that the Mets made the wrong decision, but Harvey has now pitched poorly for two-plus seasons. At this point, there was also just a black cloud hovering over him and the relentless New York media wasn’t going to make things any easier. Sometimes you have to trade a guy just to remove his presence from the clubhouse. It’s hard to fault the Mets here even if Vargas continues to stink and Harvey suddenly finds himself in Cincinnati. There seemed no chance that the Dark Knight of old was going to re-appear from the shadows to help the Mets. 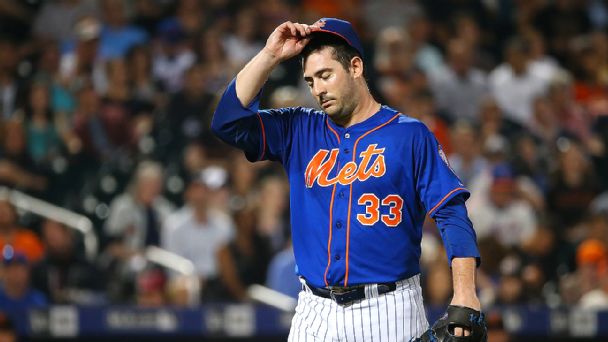 Is this a sad story? It’s easy to blame Harvey, to suggest he has wasted his talent. Maybe there’s some truth there -- if so, Harvey will have to wrestle with those demons -- but it’s also true that injuries destroyed part of that talent. As Joe also pointed out, the Mets paid Harvey less than $20 million in salaries and bonus money since drafting him in 2010. They received good value for that money -- two seasons to remember, at least.

Maybe that 2015 playoff run affected Harvey’s future. You shouldn’t blame the Mets for that, however; the goal is to win the World Series and they certainly didn’t abuse him. (His pitch counts in four playoff starts were 97, 97, 80 and 111, and he had nine days off between starting in the NLCS and Game 1 of the World Series.)

So it’s a new chapter for Harvey and the Mets. Hopefully this next one turns out better for all concerned.