HOUSTON -- On a sweltering Tuesday in August at the Houston Methodist Training Center, situated in the shadow of NRG Stadium, the eyes of most observers were fixed on second-year Houston Texans quarterback Davis Mills. Onlookers watched as the 23-year-old sliced Houston's defense in a death-by-1,000 papercuts style, mostly taking what he was given and occasionally making a big play down the field.

Those who weren't watching Mills? Many were watching first-year Texans coach Lovie Smith watch Mills. His quarterback's play will have much to say about how Smith's early tenure, and the direction of a rebuilding franchise, unfolds. The famously even-keel Smith seemed impressed, if not effusive.

"That's how he's been throughout. He's made plays," Smith said of Mills. "It's about ball security first, quarterback protecting the football. He has done that throughout camp, and once it gets down there now, you've got to push it past in the end zone. It was good to see him do that today."

The Texans have handed the keys to Mills, an 11-game starter as a rookie in 2021, to prove he can be the engine that drives the organization. Throughout the early parts of training camp, countless teammates have praised his leadership qualities. The former third-round pick out of Stanford has demonstrated growth and expressed confidence.

"I feel really good. I think I've developed a lot since the end of last season," Mills said. "I felt the progression at the end of last year and then really taking it into the offseason, big momentum and stacking on it has allowed me to come out here and start playing really fast at the start of training camp and throughout OTAs. I'm excited to keep progressing."

Is Mills a franchise QB? The answer to that question is a central storyline of a 2022 season that will offer a window into the organization's long-term future.

But the notion of Mills' success begs another question for a struggling franchise, one that has had back-to-back four-win seasons. What would success for Mills even look like?

Mills' 2021 numbers were better than every first-round QB in his draft class outside of Mac Jones, who helped lead the New England Patriots to the playoffs and earned a Pro Bowl berth.

In Mills' final nine starts, he threw for 2,307 yards, 14 touchdowns and five interceptions with a passer rating of 96. It's a stretch that included standout performances against the AFC's top seed last season in the Tennessee Titans, the Los Angeles Chargers and the Patriots against whom he combined for 867 yards passing with eight touchdowns.

Those numbers were largely down to efficiency and accuracy. After Week 5, Mills completed 69.8% of his throws in the intermediate and short areas of the field, eighth-best in the NFL.

"I do think working underneath, like short to midrange, he is accurate, which is going to help him. I think he has good accuracy," a league executive said of Mills. "He's a pretty polished thrower."

And when Mills identified an opportunity to let it rip, he executed. On deep passes of 20 air yards or more, Mills had the highest passer rating in the NFL at 132.6 and threw 6 touchdowns.

"He was just playing the position really well," an NFL assistant told ESPN earlier this offseason. "He didn't have many rookie mistakes in the games I saw. He can work through the progressions from the pocket, great mechanics, fundamentally sound, accurate at all three levels, can drive the ball and layer the ball. Really checked a lot of boxes." 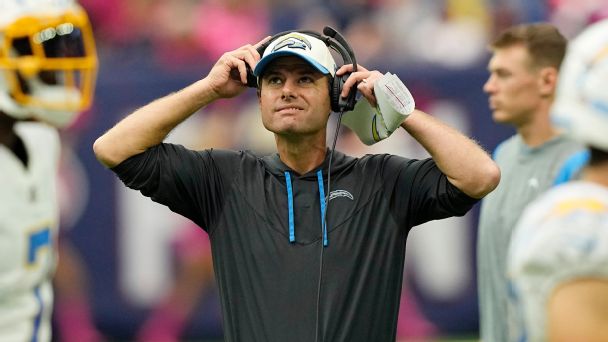 As encouraging as the numbers and sentiments concerning his play were, they belied a hard truth -- Houston was 2-9 in games started by Mills last season, with his passing numbers not enough to overcome the deficiencies around him.

Wideout Brandin Cooks went for a team-best 90 catches and 1,037 yards with 6 touchdowns, but Houston's next four wide receivers combined for 1,244 yards through the air, and no one else on the team caught more than 33 balls.

Taking the next step for Mills will depend largely on whether he has the help to move the team forward in the win column. And league observers find that to be a shaky proposition, at best.

ESPN's most recent NFL Future Power Rankings exercise ranked the Texans at No. 27, ahead of only the Detroit Lions, New York Giants, Chicago Bears, Carolina Panthers and Atlanta Falcons. The panel of league experts found the Texans to have the least talented roster in the league, when not accounting for the quarterback.

Houston's 2022 draft was largely perceived as a step in the right direction. The Texans improved the offensive line by selecting Kenyon Green out of Texas A&M with the No. 15 overall pick to play left guard. The Texans also selected Alabama wide receiver John Metchie III in the second round, but Metchie III was diagnosed with a form of leukemia and is unlikely to play this season.

Every Wednesday we dive deep into the matchups to help you find the advantages you need when setting your lineup.

Streaming Pickups: Matt Bowen identifies the players who can help you in deep leagues or in case of a roster emergency.

Next Gen Advantage: Seth Walder identifies mismatches all over the field based on proprietary analysis of NFL Next Gen Stats.

• Daily Notes: Eric Moody keeps you up to date on what you need to know from a fantasy perspective.

The Texans weren't aggressive in adding premium talent around Mills via free agency. They added ex-Colts 1,000-yard rusher Marlon Mack to beef up the running game, and they will also give a backfield chance to Florida's Dameon Pierce, a fourth-round draft pick.

Then there's the question of Smith and the new coaching staff, though the elevation of Pep Hamilton from quarterbacks coach to offensive coordinator will provide some continuity for Mills.

Beyond the offensive roster and staff construction, some evaluators around the league question Mills' pure talent to become a franchise QB.

Some who have evaluated Mills cite lack of pure arm strength as a major concern for his future in the NFL.

"For his size and his stature [6-foot-4, 225 pounds], you'd think that he would have that arm strength just to be able to generate force from what he's got. You didn't really see that," the pro scout said.

"Pushing the ball anything past 20 yards is a gamble," a league executive said. "So vertically they're always going to be challenged there with him as a quarterback."

The naysayers run counter to Mills' teammates, who have expressed nothing but belief in the former third-rounder during the early days of training camp. The star receiver Cooks says of Mills, "He can be great."

There's confidence within the locker room Mills can prove he's the future. Regardless of the concerns from experts, he has a golden opportunity. It's his show. If that nine-game 2021 sample plays out over 17 games, the Texans' QB decision in 2023 should be an easy one.

"I'm telling you, Davis is different," right tackle Tytus Howard said. "Probably one of the most poised and calm players I've ever been around. It's going to take him a long way."