TAMPA, Fla. -- Bruce Arians is stepping down after three seasons as the Tampa Bay Buccaneers' head coach and moving into a front-office role with the organization, the team announced Wednesday night.

Arians told ESPN he doesn't see the change as a retirement.

"No, moving to the front office," he said in a text message. "I'm still working."

Arians played a key role in evaluating draft prospects, and a move to the front office ensures that will continue. His new job title will be senior football consultant.

Despite multiple health scares throughout his career, Arians, 69, said this move was in no way motivated by his health. Arians and the Buccaneers had been working on a succession plan over the past several weeks, and Arians informed players and members of his coaching staff of the news before the team's announcement.

Arians went 31-18 (.633) in three campaigns with Tampa Bay, the highest win percentage of any coach in Buccaneers history, and led the team to victory in Super Bowl LV following the 2020 season. He won five playoff games with the Bucs; the previous Tampa Bay coaches won six combined.

"I have spent most of the last 50 years of my life on the sidelines as a football coach in one form or another. Today, I have made the decision to move from the sidelines into another role with the Buccaneers front office, assisting [general manager] Jason Licht and his staff," Arians said in a statement. "I love football. I love the relationships, the strategy, the competition -- everything. It has been one hell of a ride, but I know this is the right time for me to make this transition."

A Look Back At Arians' Bucs Tenure 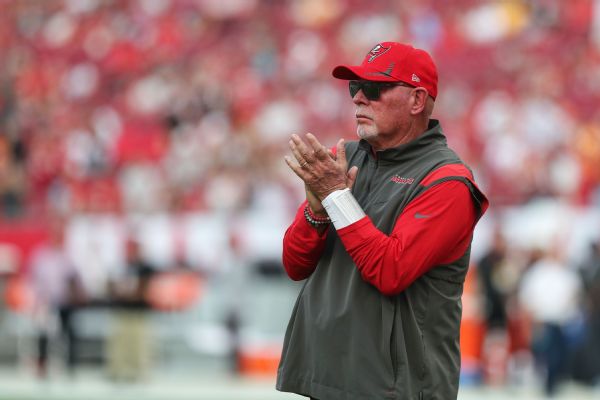 - Arians had a 31-18 (.633) record in three seasons with the Buccaneers. He has the highest win percentage of any coach in Buccaneers history and ranks fourth in wins despite only coaching three years.

A source told ESPN that Bowles was informed Monday of Arians' decision to step aside and promote him. Arians had long thought of Bowles as his successor if Bowles did not land a head-coaching job elsewhere. Bowles interviewed for head-coaching vacancies on the Minnesota Vikings and Chicago Bears this offseason.

Bowles' presence ensures continuity on a Bucs staff that has been largely unchanged since the Super Bowl win, with the exceptions of departures by assistants Mike Caldwell, Cody Grimm and Antwaan Randle El.

"I am appreciative of the family and Jason Licht for having faith in me to take on this role, and to Coach Arians for his support and guidance over the past four decades," Bowles said in a statement. "Tampa has become home for my family, and we are excited to remain part of this community for years to come. As an organization, we have all the pieces in place to continue the winning standard that has been established here in recent years. I am eager to get started with our players, coaching staff, and front office in preparation for the 2022 season."

The Bucs were not subject to the requirements of the Rooney Rule, since their coaching vacancy occurred after March 1, when much of the talent pool in which the club would seek out potential candidates is largely unavailable. Also, the anti-tampering policy says that after March 1, clubs are under no obligation to grant permission for a coach under contract to interview.

Arians' departure is the second major announcement for the Bucs this offseason, following quarterback Tom Brady's announcement in February that he was ending his career. Brady, a seven-time Super Bowl champion quarterback, returned 40 days later, saying he would play a 23rd season and noting he had "unfinished business.''

A source told ESPN that Arians informed Brady of his decision to step aside shortly after Brady announced his return.

Brady, in an Instagram post Wednesday night, said Arians was a major part of his decision to play for Tampa Bay and that he'll be "forever grateful."

"You are an incredible man and coach, and it was a privilege to play for you," Brady wrote. "You are a true NFL legend and pioneer for all the work you have done to make the league more diverse and inclusive. Smart, tough, and loyal are a few of the words to describe your style. I will always remember the conversations we had when you recruited me two years ago and all of the things we discussed came true."

There had been rumblings of a rift between Arians and Brady, but Arians denied it this week in an interview with NFL Network at the NFL owners meetings, and he denied speculation that Brady wanted to play elsewhere in 2022. Arians left the owners meetings a day early and canceled his previously scheduled media availability for personal reasons.

"I have no clue where it comes from," Arians said. "Somebody's got to write a story every day about something. Tom and I have a great relationship. Even during the retirement: 'Where you at?' 'I'm in Italy.' 'How's it going?' 'Got the kids over here.' You know, just checking on him. I can't get him back on the golf course because he's traveling too much, so I can't win enough money off of him."

When asked about possible friction between the two, Licht said last week, "You'd be surprised we didn't talk about it much. You can't believe everything you hear and see and read. There's always going to be some friction between people on a staff and players and a coach. It's just normal. And like you said, it can be healthy. We didn't really think much about it."

While Arians had previously retired as head coach of the Arizona Cardinals following the 2017 season before returning to coach the Bucs in 2019, multiple assistants on his staff told ESPN they were shocked and surprised by the news of his transitioning to a new role.

In his statement, Arians said that he "really began thinking about my personal transition plan earlier this offseason."

"I wanted to ensure when I walked away that Todd Bowles would have the best opportunity to succeed," he said. "So many head coaches come into situations where they are set up for failure, and I didn't want that for Todd.

"Tom's decision to come back, along with Jason and his staff doing another great job of keeping the core of this team intact during free agency, confirmed for me that it was the right time to pass the torch to Todd."

With Arians stepping down, 10 NFL teams -- nearly a third of the league -- will have a new head coach this upcoming season. That represents the most coaching changes from one season to the next since 2008 and 2009, when there were 11 changes at the position.

ESPN Stats & Information and The Associated Press contributed to this report.