Give Atlanta Braves general manager Alex Anthopoulos credit for acting quickly and decisively in the offseason while many of his peers wait out the market hoping for bargain-basement deals. A year ago, he signed Josh Donaldson in late November to a one-year contract while other top free agents didn't sign until spring training had started. This year, Anthopoulos has added free-agent left-hander Cole Hamels on a one-year contract, according to reports, in addition to previously signing Giants closer Will Smith, re-signing reliever Chris Martin and signing former Rays catcher Travis d'Arnaud.

It has been a sneakily active offseason for the Braves -- and what could be a very effective one as they push for a third straight NL East title after winning 97 games in 2019. The free-agent game isn't as simple as identifying potential targets and offering fair-market contracts. You have to close the deals. If you wait too long on one player, your backup plan may end up signing with another team. There's a clear advantage to locking up the player you want as early as possible.

Hamels will turn 36 this month, but he hasn't lost all that much from his peak days with the Phillies, going 7-7 with a 3.81 ERA in 27 starts for the Cubs in 2019, missing a month with an oblique injury. His adjusted ERA+ of 117 isn't far off from his career average of 123, so he still projects as a solid No. 2 or 3 starter -- and, specifically for the Braves, a veteran lefty to help lead a young staff and replace free agent Dallas Keuchel in the rotation.

Hamels has lost a tick off his fastball, averaging 91.7 mph in 2019, but he had full command of the vintage Hamels changeup, as batters hit just .170/.237/.270 against it. Opponents hammered his four-seam fastball to a 1.009 OPS, but the odd thing is he still threw it more often (36% of the time) than any season in the previous five years while throwing fewer two-seamers in the process. It will be interesting to see whether a new pitching coach and new analytics staff try to transition him into throwing more two-seamers and cutters.

The Braves needed to add a starting pitcher, as they have to replace Keuchel and free agent Julio Teheran -- that's 52 quality starts missing from the 2019 rotation that ranked seventh in the NL with a 4.20 ERA. While a lot of analysts and fans earmarked Madison Bumgarner as the veteran lefty who would go to the Braves because Bumgarner is from North Carolina, the Braves were never going to be in that game. Bumgarner may command a deal close to $100 million, and the Braves ranked 27th in the majors in free-agent money committed in the 2010s. (The one big contract they gave was B.J. Upton for $72.25 million.) The franchise owners at Liberty Media simply don't go after the big free agents, so getting Hamels on a one-year deal fits their priorities.

Roundtable: What Donaldson brings to the Twins

There's hope that the rest of the rotation can be a little better in 2020 as well, especially since Mike Foltynewicz found his form down the stretch (at least until that final game against the Cardinals) after dealing with shoulder issues in spring training and a stint in the minors. Mike Soroka had a 2.68 ERA as a 21-year-old rookie, and Max Fried had a solid first year in the rotation with 17 wins and a 4.02 ERA. Options for the fifth spot include Sean Newcomb, Bryse Wilson and Kyle Wright, or maybe another lower-cost veteran free agent.

Of course, there's still a big hole in the lineup if Donaldson doesn't return -- and it's going to take a multiyear deal to get him this time. He hit .259/.379/.521, played good defense, and while Ronald Acuña Jr. and Freddie Freeman received more attention and finished in the top 10 of the National League MVP voting, Donaldson was every bit their equal on the field, actually topping both in Baseball-Reference WAR.

The Braves do have a potential in-house replacement for Donaldson's bat in Austin Riley, who moved to left field in the big leagues and started out mashing like Chipper Jones when he hit .324 and homered nine times in his first 18 games. Big league pitchers eventually exploited his aggressive approach, however, and he finished at .226/.269/.471, including a lowly .676 OPS against right-handed pitchers. There's certainly big-time power potential there, but right now, going from Donaldson to Riley at third projects as at least a four-win downgrade -- the margin by which the Braves won the division over the Nationals. 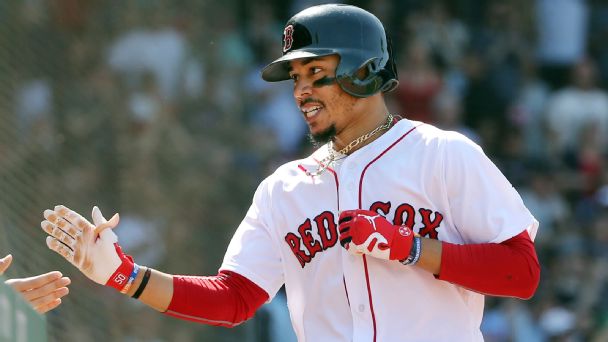 Betts on the block? Cole to crack $300M? MLB GMs, insiders weigh in on the winter. Jesse Rogers

Is there another move to make? The Braves are currently at an estimated $158 million in payroll, $20 million higher than last season and the highest they have ever run, but that still doesn't project as a top-10 payroll. Although adding another bat or pitcher makes sense, Liberty Media's tightfisted fiscal priorities suggest this is probably it for the Braves. They could trade Ender Inciarte, set to make $7.7 million in 2020 and $8.7 million in 2021, to clear a little salary as top prospect Cristian Pache should be ready for the majors. Inciarte had injury issues in 2019, but was a 3.4-WAR player in 2018 and would draw interest on the trade market.

I like what Anthopoulos and the Braves have done, but replacing Donaldson's production in the lineup will require improvements from the guys on hand -- certainly possible given the youth of Acuña, Ozzie Albies and Dansby Swanson. This is a franchise, however, that has lost eight consecutive division series and one wild-card game since last winning a playoff series way back in 2001. Will a good offseason be good enough?