Video Assistant Referee causes controversy every week in the Premier League, but how are decisions made, and are they correct?

After each weekend we take a look at the major incidents, to examine and explain the process in terms of VAR protocol and the Laws of the Game.

What happened: In the seventh minute with the game goalless, Wolves broke and Nelson Semedo played the ball through to Goncalo Guedes, who went down inside the area up against Arsenal defender William Saliba. Referee Stuart Attwell indicated no penalty, then stopped the play for a delayed offside flag.

VAR review: The first of two very similar incidents, with attackers getting to the ball ahead of a defender, and the defender then kicking the attacker. But this incident has a few additional layers to it.

The assistant delayed his flag and allowed the attacking phase to play out, which allows the VAR to review anything that happened up to the point when the referee stopped play if the offside flag was incorrect.

Much like earlier this season when Dean missed a red card for Tottenham's Cristian Romero when he pulled the hair of Chelsea defender Marc Cucurella, this appeared to be another very quick review to decide there was no clear and obvious error by Attwell.

Guedes clearly gets his foot to the ball first and is then kicked by Saliba. A penalty is by far the better outcome, even if some would argue that it's a coming together between the players both going for the same ball.

If a penalty had been given, there wouldn't be a red card for Saliba as he would be judged to making a genuine challenge.

However, contrary to some reports, we don't actually know if Guedes was onside. Dean would apply the offside technology only if he decided there was a missed penalty. It was exceptionally close, and Guedes might have been marginally behind the ball. But without the application of the offside lines, we cannot be sure the Wolves forward wasn't leaning forward in front of the ball.

What happened: In the 70th minute with Brighton trailing 2-1, Solly March and Lucas Digne went for a loose ball inside the area. March just got a touch on the ball, with Aston Villa defender Digne in the process of attempting to clear it. With the ball gone, Digne kicked the Brighton wing-back. Referee Chris Kavanagh said no to the penalty claims.

VAR review: This is very similar in nature to Guedes-Saliba. Digne goes to make a clearance, but March comes in and gets a touch on the ball first. The Aston Villa defender then kicks March after the ball has gone. Again, this is the VAR, Jarred Gillett, making a judgement on two players coming together rather than there being a foul -- but it should have been a penalty.

Unlike with the Wolves incident, Gillett did appear to give it proper consideration and a full review. It's easy to see why Kavanagh might not judge this as a penalty, because the way the ball moves gives the impression the Villa player got to it first (see West Ham vs. Leicester for more on this.)

This then comes down to the replay angles being used by the VAR. The one from the referee's viewpoint is less clear, but the VAR has the advantage of the reverse view, which clearly shows it should have been a penalty.

We will discuss how precedents can impact a VAR later, and it might be a factor here, considering what had happened 24 hours earlier at Wolves. Garrett, too, had been criticised for getting involved when it wasn't necessary when disallowing West Ham's goal at Chelsea earlier this season, and he hasn't made an intervention as the VAR since then.

Finding the point at which fans and players expect a VAR to get involved in a game on such subjective decisions is very difficult -- especially if the referee tells the VAR he saw the contact by defender on attacker but didn't feel it was enough to warrant a penalty.

As with Guedes, although there's a case to stick with the referee's original decision, a penalty should have been awarded.

What happened: Tottenham Hotspur striker Harry Kane equalised for Spurs in the 25th minute, but when the corner was delivered, Clement Lenglet collided with Illan Meslier, with the Leeds United players furious that a foul was not awarded in favour of their goalkeeper.

VAR review: The VAR, Paul Tierney, judged that referee Michael Salisbury hadn't made a clear and obvious error in allowing play to continue, and thus Kane to score.

That Meslier ended up on the floor inside the goal when Kane scored is in itself immaterial -- what matters is how the goalkeeper got there.

Meslier got a hand to the ball, but he was prevented from making a proper clearance by Lenglet. This is always an important consideration, along with whether the collision was incidental or a foul. Most fans would expect this to be ruled out for a foul on the keeper.

Earlier this season, referees came in for a huge amount of criticism after the VAR incorrectly intervened to rule out goals for Newcastle United and West Ham United for fouls on the goalkeeper. With the Premier League making it clear it did not expect a VAR to be intervening in such situations, it has to have an effect on future decision-making, upon where a VAR judges that subjective line for an intervention.

Added to that, the referee in that Newcastle game just happened to be Salisbury. Would a VAR be less likely to advise Salisbury had made a mistake when he had already been shown to have good judgment of such situations?

Precedents shouldn't really be set because each individual decision has its own unique circumstances, but it must have an influence, at least subconsciously.

What happened: In the 26th minute, Bernardo Silva tried to play a ball into the area from the byline, and it hit Rico Henry on the arm before going out of play. Referee Peter Bankes gave a free kick on the edge of the area, but there was a check to see where the offence took place.

VAR review: Man City players and supporters appealed for a penalty as soon as the ball hit Henry's arm. Replays immediately showed that it hit the Brentford player's arm, which was raised and created a barrier to the cross.

For the VAR, David Coote, this is about having proof of the handball being inside the area (the line belongs to the box, on the line would be a penalty.) We saw this last weekend when Arsenal wanted a penalty for a handball against Chelsea's Cucurella but the VAR could not say for certain the handball was on the line.

Coote didn't have an angle directly square to the penalty area line, so there was enough doubt that the offence took place just outside the area. Henry's handball was most likely on the line, but the VAR cannot work with mere probabilities and needs definitive evidence.

Without ball tracking around the whole pitch, and tennis-style Hawk-Eye line calls (which would be a huge technological undertaking), there will always be incidents that a VAR cannot be certain of and must make an evidence-based judgment.

What happened: From the free kick awarded for Henry's handball, the ball broke to Kevin De Bruyne inside the area, and he went down under a challenge from Henry. Referee Bankes again turned down appeals for a penalty.

VAR review: City might have been lucky last weekend to get a fairly soft penalty decision given on the field that the VAR wouldn't overturn, when De Bruyne was fouled by Fulham's Antonee Robinson, and we saw VAR decision-making in reverse here.

There was definitely a small amount of contact from Henry and De Bruyne, but it wasn't significant enough to warrant a VAR intervention. It's the kind of soft VAR penalty decision the referees' body have been trying to cut out.

A penalty would probably have stood had the referee given it, with the on-field decision carrying most weight.

It was one of three VAR reviews for a penalty in quick succession, with Erling Haaland and Aymeric Laporte appealing for a spot kick after holding inside the area; neither of these would be considered a clear and obvious error.

What happened: In the 62nd minute, Armel Bella-Kotchap was robbed of the ball by Mohamed Salah, and when the two players got into the box, both went to ground. Referee Simon Hooper waved away the Egyptian player's appeals for a penalty kick.

VAR review: Salah and Bella-Kotchap had each other's arm locked, so the VAR is not going to get involved to award a penalty in a situation like this.

Guidance issued at the start of the season made it clear that if two players are involved in simultaneous and similar holding actions, play should be allowed to continue.

What happened: With Leicester City 1-0 up at the London Stadium in the 38th minute, Patson Daka went down in the area under a challenge from Craig Dawson. Referee Gillett thought the West Ham United defender had won the ball.

VAR review: One of only two VAR interventions over the weekend, and most definitely a correct one from Kavanagh. Because the ball moved to the right, Gillett believed it had been played by Dawson. But the replays clearly showed that Dawson caught Daka's foot and the ball deflected off to the right, giving the impression to the referee that the defender had won the ball.

As with the Saliba incident, Dawson (who was booked) wouldn't be shown a red card for denying a clear goal-scoring opportunity (DOGSO) because he made an attempt to play the ball with his foot. Guidance indicates that only in very extreme circumstances would a player be shown a red card for DOGSO inside the area when the challenge has been made by the foot.

What happened: In first half added time, Newcastle United's fans and players were incensed when referee Robert Jones didn't award a penalty for a handball against Trevoh Chalobah.

VAR review: A simple decision for the VAR, Andy Madley.

There is a specific exception within the handball law that states that it's not an offence if the ball hits the arm when it is being used to support the body -- even if the arm is away from the body and making it bigger.

This is the case whether the arm is touching the ground or is being extended to touch the ground.

What happened: Nottingham Forest's Morgan Gibbs-White thought he had given Forest the lead in the 54th minute, only for the delayed flag to go up for offside.

VAR review: A very tight decision, and one that required the "benefit of the doubt" provided by the attacking and defensive offside lines touching for the goal to count.

When this tolerance level is used to rule a player is onside, a single green line is drawn to the defensive player. 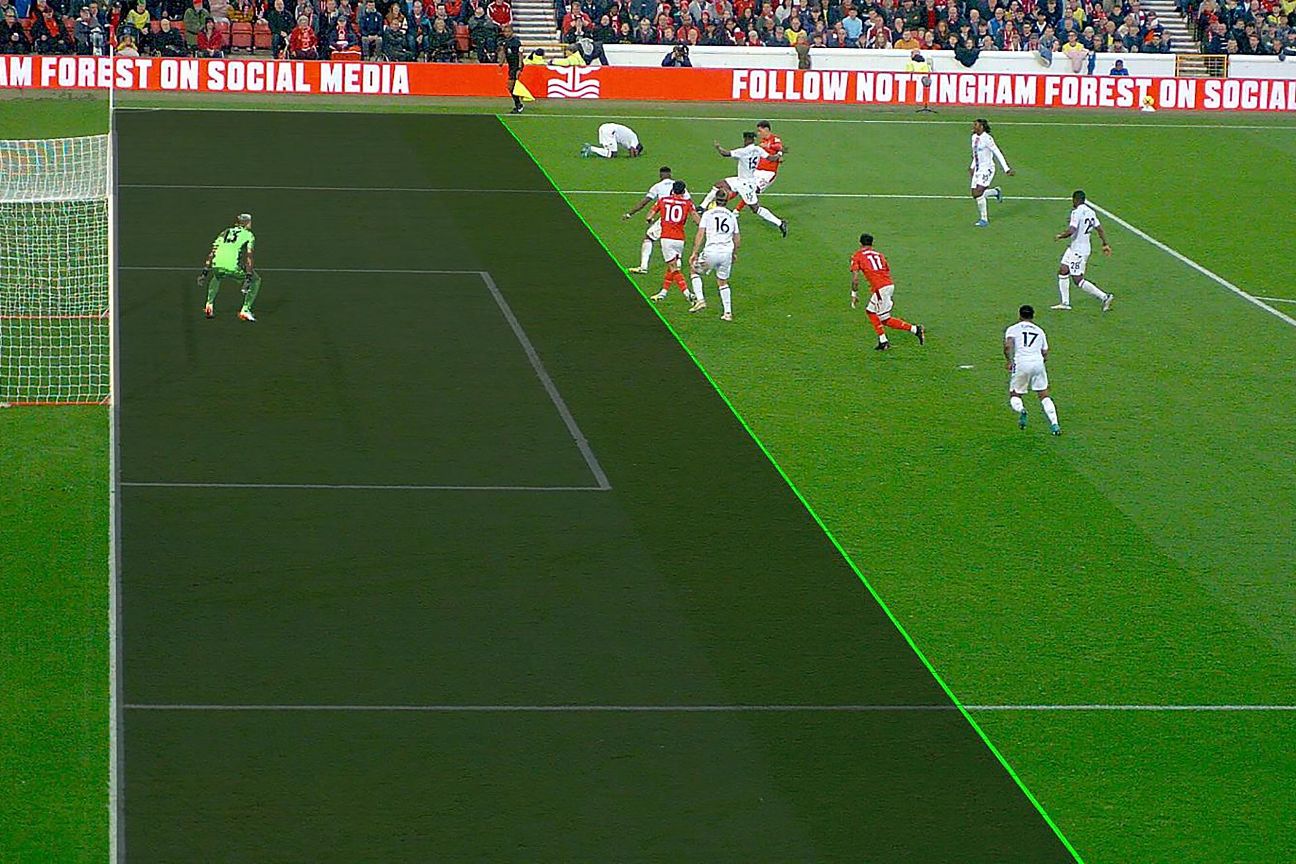 Information provided by the Premier League and PGMOL was used in this story.