Welcome to ESPN's Insider Notebook, featuring contributions from our reporters across the continent. In this edition, there's the latest on Hugo Lloris' new guard dog, transfer news from Manchester United and City, plus an insight into the Premier League's planned return.

Tottenham and France goalkeeper Hugo Lloris has a new best friend during lockdown. He bought a £15,000 Belgian shepherd as a guard dog that is tasked with protecting the family property in north London, especially when Lloris is away on match duty and his wife, Marine, and their three children are home alone.

Lloris' bought from a London based company that specialises in guard dogs. It has been trained to guard a territory and is independent but also friendly to children and is already a big hit in the household, enjoying the garden and -- especially -- the children's climbing frame!

The new arrival came before the news that Spurs teammate Dele Alli was robbed at knifepoint. Thieves broke into his home in the early hours of Wednesday morning, stealing thousands of pounds worth of jewellery.

The internal wrangling between the Premier League and the UK government that is hampering "Project Restart" was laid bare to ESPN in successive phone calls with contacts on either side of the divide.

- Stream new episodes of ESPN FC Monday-Friday on ESPN+
- Stream every episode of 30 for 30: Soccer Stories on ESPN+

After one day of discussions -- including a Premier League shareholders' meeting and a subsequent, separate dialogue with the UK's Department for Digital, Culture, Media and Sport (DCMS) -- two calls came 10 minutes apart which highlighted the divide.

The first, from a senior figure at a Premier League club involved in the talks, expressed frustration at a lack of clarity from the government. 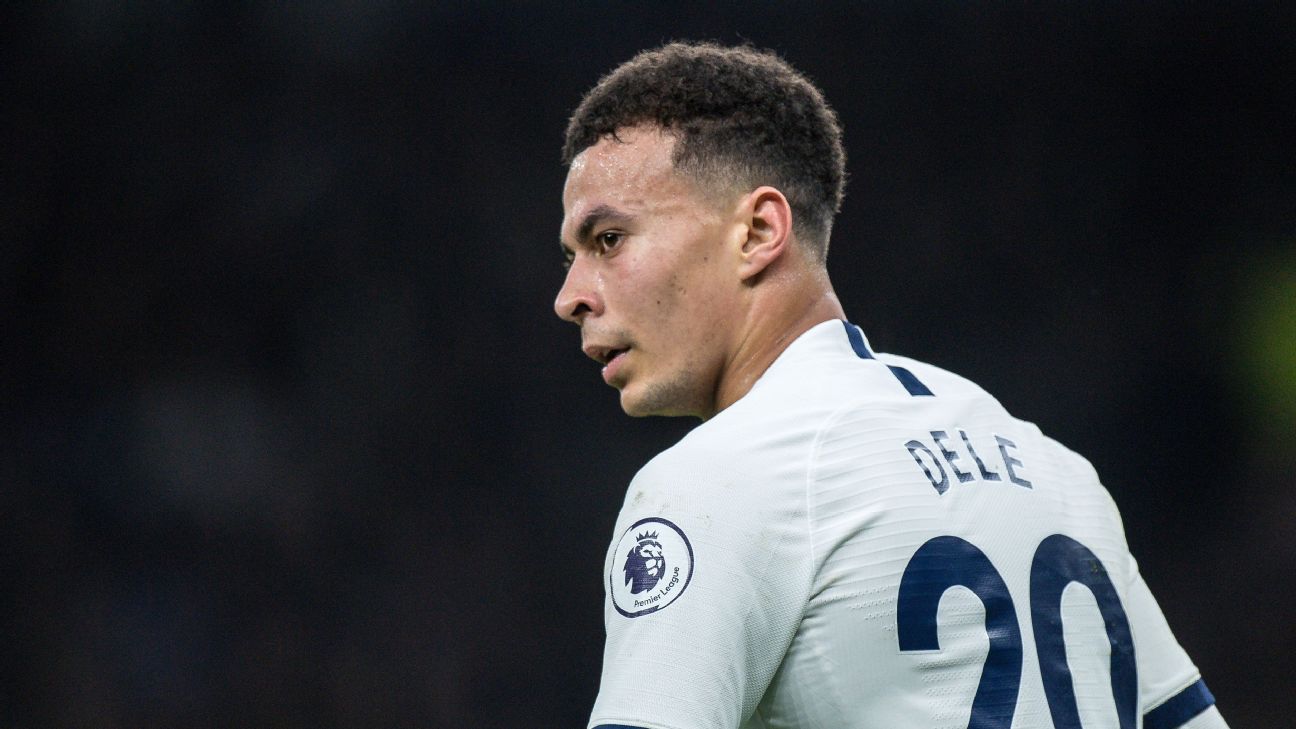 "They want us to continue but there remains real confusion over exactly how we can do it -- the government needs to get their act together," the source told ESPN.

Shortly afterward, a figure with intimate knowledge of DCMS detailed their view of the situation.

"The Premier League really needs to get their act together and show us how they can make a restart work," they told ESPN.

Mitigation is found in the unprecedented times we are living in, but the absence of firm-footed leadership is seemingly being felt on all sides. It is partly why, as the Bundesliga resumes this weekend, the Premier League may even struggle to meet UEFA's May 25 deadline to give a concrete guarantee it can resume at all.

The sooner clarity emerges from this confusion, the better. -- James Olley

FIFA awards ceremony off due to COVID-19

The Best awards are in doubt after FIFA confirmed the ceremony for 2020 has been postponed due to the coronavirus pandemic, and with just two months of action having taken place in 2020, it is a possibility that all individual prizes could be scrapped.

The ceremony has been held across Europe since its inception in 2016, with Lionel Messi winning last year. Cristiano Ronaldo won the award in its first two years before Luka Modric claimed the prize in 2018.

It was due to take place in Milan in September, but will now likely be replaced by a virtual ceremony if one happens at all.

"The Best FIFA Football Awards event, which was originally scheduled for Sept. 21 2020 in Milan, will not take place and different alternatives are being considered by FIFA," a statement from world football's governing body read. -- Andrew Cesare Richardson

The truth about Barcelona's move for Man United youngster

Manchester United are relaxed about the future of Angel Gomes and remain in talks over a new contract at Old Trafford as the 19-year-old seemingly becomes one of the most sought-after young talents in the game, with Chelsea joining Barcelona and Borussia Dortmund in the race to sign the midfielder.

There is no sense of alarm at United, though, despite Gomes's £17,000-a-week deal being due to expire at the end of next month.

While there is an acceptance that Chelsea and Dortmund are monitoring the player's progress, reports of Barca's interest earlier this season proved to be overstated and something of a disappointment to the Gomes camp.

While there was genuine interest, the Spanish champions were not planning to team him up with Messi, Antoine Griezmann and the rest of Quique Setien's stars.

Sources have told ESPN that Gomes, who has made 10 first-team appearances for United, was actually being lined up for Barcelona's B team, which is on course to play in the Segunda Division next season, rather than the senior side. -- Mark Ogden

Manchester City are willing to allow Leroy Sane to run his contract down and leave on a free transfer rather than let him move to Bayern Munich in a cut-price deal this summer, sources have told ESPN.

Sane is under contract at the Etihad Stadium until 2021 but has so far refused to sign an extension. Bayern are interested in the winger, but City are set to refuse any bid in the next transfer window that they believe falls below his market value.

It could mean Sane walks away from the club for free in 12 months' time, but sources have told ESPN that City believe that is preferable to accepting a low fee now.

Sane has not played since August after suffering a knee ligament injury. The 24-year-old was on the verge of a return to first-team action before the coronavirus pandemic and could play a part before the end of the season, if the campaign is allowed to restart. -- Rob Dawson

As the Bundesliga prepares to become the first major European league to return to action this weekend, a detailed 51-page plan has been released by the German Football League (DFL).

It includes instructions for players not to celebrate goals together, exchange high-fives or embrace. Players are also asked not to spit and goalkeepers must refrain from shouting.

However, despite all the planning and guidelines, sources have told ESPN that referees will not caution players if they do any of the above during a game, as such offences are not covered in the league bylaws. Bundesliga officials have said there will be no rule changes and it is not up to them to book players for celebrating goals or spitting on the pitch.

A mandatory hygiene officer at every club is expected to take notes of the players' failings, but it remains unclear who will have the right to sanction breaches of the DFL paper. It could be the sports jurisdiction, the local health authorities or no-one at all. -- Stephan Uersfeld

How and when did Luka Jovic break his foot before Real Madrid returned to training this week? So far, three different versions have been offered to explain the latest chapter in one of the most unusual debut seasons anyone can remember at the Bernabeu.

Real Madrid announced that he had suffered a fracture in his right heel in a typically brief medical report last Friday. The news was greeted with bemusement, given that the club weren't due to begin training until three days later.

The initial story, provided by sources close to the player, was that Jovic had hurt himself last Thursday while working out at his Madrid home. But that was contradicted by Jovic's father, who told Serbian newspaper Kurir that the 22-year-old "was getting ready at home in Belgrade and during an exercise he felt great pain. Who knew it was so serious?"

Then, the most bizarre explanation yet. "He was really injured, he barely survived!" a "source close to the family" told Kurir on Sunday. "He fell from a wall, I don't know how to explain it and I don't really understand how he managed it. Basically, it happened by accident.

The €60m striker has scored just two league goals since Real Madrid beat a number of top European clubs to his signature last summer. A failure to adapt to life in Spain was followed by allegations Jovic had broken isolation rules in Serbia after flying home when the coronavirus pandemic began.

With Real Madrid in the market for a centre-forward, and some at the club sceptical about the account he has given them of this latest incident, Jovic might be running out of chances to turn his Bernabeu career around. -- Alex Kirkland

The Mexican footballing family hasn't exactly come together during the coronavirus pandemic. Promotion and relegation between the top two divisions was suspended for six years after split votes, there have been protests by Ascenso MX players and a sense of uneasiness of what the "developmental" second division will look like and whether it is financially viable.

The players' association (AMFpro) took the standoff a stage further last week, in a detailed letter asking FIFA to act against a decision it says "threatens the human rights" of players. It added that Liga MX used the COVID-19 crisis as a "moment of opportunism and irresponsibility."

The leaked reply from FIFA was polite and asked that Liga MX and the Mexican FA made sure the players were taken into consideration. But it's a long way from the governing body intervening, and it's difficult to see FIFA acting when there are other prevalent issues in Mexico, including multi-ownership of teams and the grey area of free agency.

Mexico's player association is acting boldly and breaking new ground when it comes to holding those in power accountable. It'll also continue to battle for the unpaid wages of Veracruz players and that there are safe conditions to return after Liga MX's suspension.

But to really grab attention -- via a strike or taking the promotion/relegation issue to the Court of Arbitration for Sport -- will take unprecedented unity between Liga MX players in support of those in the second division. -- Tom Marshall