Liverpool have unveiled the new home kit which sees their iconic club colours re-energised for the 2021-22 season, when they hope to recapture their Premier League crown.

Jump to: Bayern look bold in black-and-gold away kit

As is par for the course these days, the club have delved back through the annals of time in search of inspiration for their latest strip, modelled by current players including Virgil van Dijk and Missy Bo Kearns. They settled on the 1964-65 season during which, with legendary manager Bill Shankly at the helm, the club won their first ever FA Cup.

Appropriately enough, the Reds wore matching red shirts, shorts and socks for the first time during their historic cup run -- as opposed to the red shirt and white shorts they had previously worn since the turn of the century.

Decked head-to-toe in red, Shankly's side beat Leeds United 2-1 at Wembley in a gruelling final that saw all three goals scored during extra time. Shankly claimed at the time that the flood of all-red represented "danger and power" and would therefore help give his side a marginal edge over their opponents.

The late Ian St. John, who scored the winning goal for Liverpool in the 1965 FA Cup final, claimed the decision to wear all-red was made by Shankly in a bid to make his players look and feel like giants on the pitch.

"He thought the colour scheme would carry psychological impact -- red for danger, red for power," St John wrote in his autobiography. "He came into the dressing room one day and threw a pair of red shorts to [team captain] Ronnie Yeats. 'Get into those shorts and let's see how you look,' he said. 'Christ, Ronnie, you look awesome, terrifying. You look 7 feet tall!'"

The first time Liverpool played in an all-red strip came in November 1964, against Anderlecht in the first leg of the first round of the 1964-65 European Cup -- a match the Reds won 3-0 at Anfield.

Shankly's side reached the semifinals that season, losing 4-3 on aggregate to Inter Milan who went on to retain the trophy, but that didn't stop them persevering with their new colour scheme. Six months later, the ploy finally bore fruit as Liverpool reached the FA Cup for only the third time in their history and won it while dressed entirely in red. 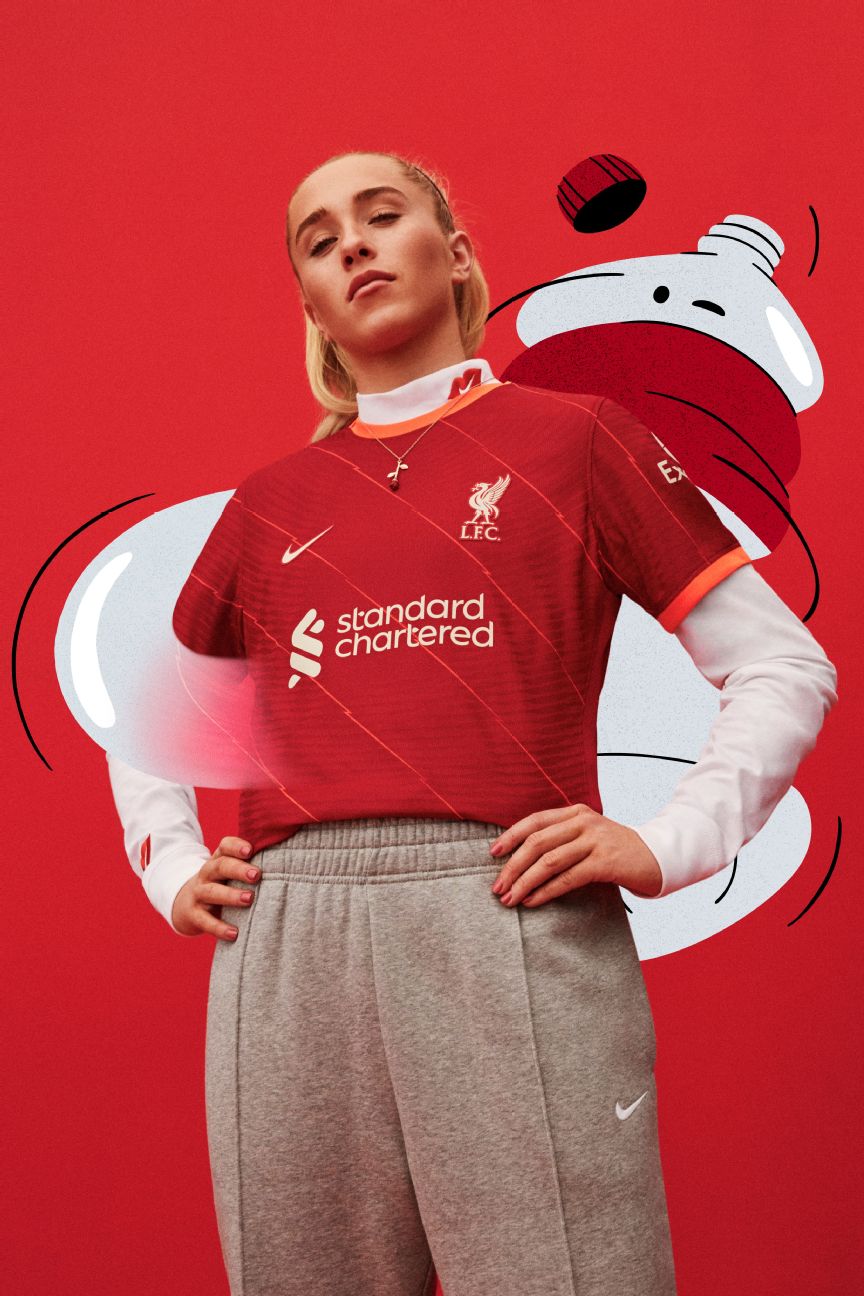 As such, that famed combination -- red shirt, red shorts, red socks -- has been selected for use again in 2021-22 as Liverpool seek to reclaim their spot at the summit.

Directly motivated by the era of dominance that Shankly's influence ushered in at Anfield, both the men's and women's team will wear a vibrant shirt, pinstriped with a near-neon crimson trim.

The vivid colours are intended to represent the same sense of power, energy, and danger that Shankly demanded his Liverpool teams play with -- teams that won four league championships, three FA Cups, and the UEFA Cup during the Scot's 15-year tenure.

"It's lovely to see the perfect blend of our heritage and innovation for our home kit," said Van Dijk. "I can't wait for the fans to see it in person."

A select number of fans (10,000 to be precise) will be able to see the new kit worn for the first time when Liverpool welcome Crystal Palace to Anfield on May 23 for their final league game of the season.

In a week chock full of kit drops, Bayern Munich are the latest big club to roll out their new wares for the 2021-22 season.

The Bavarian giants' new away shirt has an incredibly regal air thanks to a classic black-and-gold colour combination, which sits like a gilded garnish atop a subtle quartered design.

After winning the Bundesliga for a record 30th time this season, Bayern have certainly earned the right to wear gold -- though the shirt does not feature any stars above the club crest. These instead will be reserved for the accompanying 2021-22 home shirt, that is set to be unveiled in July.

The back of the neck also carries the symbol of the Munchner Kindl ("Munich child") who appears on the city's coat of arms. Originally depicted as a monk holding a book, the Kindl has morphed into a cloaked child over the years and adorns everything from the Munich town hall to Oktoberfest venues.