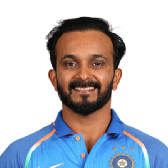 Zimbabwe had never won a T20I series of more than one match. A chase of 139 presented them an opportunity to achieve this, and a nervy final over from Barinder Sran brought them to within one hit of victory. But Elton Chigumbura, with four needed off the last ball, could only manage enough power and elevation to hit a low, wide full-toss into extra-covers' hands. India, never quite convincing, won by three runs and took the series 2-1.

Until this match, Sran had impressed with his new-ball swing, but had never really come under pressure. Now, India were bowling second for the first time on the tour, and were defending 138. A number of Zimbabwe's batsmen had got off to starts, but no one had carried on. They now needed 21 off the last over, with Timycen Maruma and Chigumbura at the crease, both batting on 12. Maruma had shaved six off the target with a massive leg-side clout off Jasprit Bumrah in the penultimate over.

Now Sran sent down a length ball, and Maruma, clearing his front leg once again, clobbered it over the midwicket boundary. Then Sran brought square leg and fine leg into the circle, and, in looking to deny Maruma the scoop over the infield, slanted the ball too wide outside off stump. The pressure was firmly on, and a high full-toss followed, providing width for a slap to the cover boundary. No-ball, nine runs to get off five balls, free hit to come.

It was at this point that Sran pulled his death-bowling skills together, sending down three successive wide yorkers, all there or thereabouts: dot, dot, single. Eight to get off two, and Chigumbura ran down the pitch, slogged, and streaked a lucky edge to the third man boundary.

The situation was something like the first ODI of India's tour to Zimbabwe last year; then it was Bhuvneshwar Kumar bowling to Chigumbura with six to get off the last ball. Chigumbura could only get a single, unable to get any elevation on a yorker despite batting on 103 at the time. Sran couldn't quite nail his yorker, but his full-toss was low enough to deny Chigumbura and Zimbabwe.

That India had 138 to defend was down to Kedar Jadhav, who scored 58 off 42 balls - his first half-century in T20Is - to lift a batting line-up that got into early trouble on a pitch with decidedly low bounce and inconsistent pace: some balls stopped, some skidded, and the batsmen came to realise that a stump-to-stump line was rather difficult to score against. When Jadhav walked in, India were 27 for 3, with Manish Pandey's first-ball run-out adding to the early loss of both openers.

Jadhav added 49 with Ambati Rayudu for the fourth wicket at exactly a run a ball. Both batsmen were kept quiet by the conditions and Zimbabwe's use of them, before Rayudu ran down the pitch, got too far from Graeme Cremer's legbreak, and holed out to long-on. Neville Madziva and Tendai Chatara followed that up with three quiet overs, conceding only 15, and Donald Tiripano profited from the pressure built by his seam-bowling comrades, MS Dhoni slogging across the line and inside-edging onto the stumps. In the process, a bail flew into Dhoni's helmet and hit him close to his right eye; when India fielded, the backroom staff came on at regular intervals to administer eye drops.

At 93 for 5 in the 17th over, India seemed to be losing their way a bit, but Jadhav took charge in the next over, jumping out to Chatara to hit his first ball for a clean, straight six, and then staying back to one just short of yorker length to carve it to the point boundary. Jadhav ended the over with an inside-edged flick onto his pad which ran away to the fine-leg boundary to bring up his half-century.

Tiripano, mixing up his pace well, dismissed Jadhav in the 19th over, but Axar Patel carried the momentum forward into the last over, launching Madziva for six over long-off. It wasn't the biggest total, but Zimbabwe would need to bat well to get 139 on this pitch.

They did this, in spurts, always staying on course, but losing wickets with enough frequency to keep India in the game. Vusi Sibanda, who replaced Sikandar Raza in Zimbabwe's XI, came in at No. 3 and gave them early impetus, hitting Dhawal Kulkarni for two straight fours either side of a slap to the cover boundary, all in the fourth over. By the end of the fifth, they were 38 for 1.

Jasprit Bumrah, Axar Patel and the spread-out post-Powerplay fields quietened Zimbabwe, and Hamilton Masakadza, who had moved to 15 off 20, was trapped lbw by Axar's left-arm spin in the ninth over, trying to sweep a stump-to-stump ball. Kulkarni then had his revenge against Sibanda when he nipped one back to catch him falling over, and Zimbabwe, at 60 for 3 in the 11th over, had to start all over again.

Yuzvendra Chahal eased the pressure with frequent long-hops. Sibanda had already pulled him for four; now Peter Moor clubbed him for sixes in the 12th and 14th overs, and followed up with another, lofting a flighted ball cleanly over extra-cover. But he fell in the same over, and with Bumrah and Axar coming back for three more tight overs, Zimbabwe were left needing 35 off the last three.

Bumrah then pulled off a stunning, leaping catch at short third man to dismiss Malcolm Waller, whose uppercut off Kulkarni had looked destined to go for four, and Maruma and Chigumbura only managed three off that over. Maruma's heaved six off Bumrah kept Zimbabwe in the game, just about, setting the stage for the tour's dramatic conclusion.

No. of players who have appeared in 50 or more T20Is for Zimbabwe. Hamilton Masakadza becomes the first to play that many T20Is for his country.

The previous highest score in T20Is for Rayudu and Jadhav. Both the batsmen have gone past that score in this match.

No. of times India lost 3 or more wickets in the Powerplays against Zimbabwe in T20Is, in 7 matches. 29 is India's joint 4th-lowest powerplay score in T20Is.

No. of international matches captained by MS Dhoni, which equals Ricky Ponting's tally at the top of the list