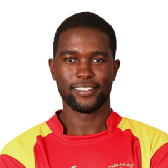 Elton ChigumburaZimbabwe
'Time to redeem ourselves as a team' - Chigumbura

Player Of The Match

4.55pm That's it from us for today. Sensational game. We'll be back on Monday for the second T20. Till then, loads of sports action from around the world.

Meanwhile on Espn.in, here's what former players and coaches had to say about the Indian hockey team's performance against Australia in the Champions Trophy final last night.

4.35pm If the stands at Harare Sports Club were empty a few days ago, they may not be for the rest of the series. Wild celebration in the crowd as the songs will go on and on all night. Defending 8 off the final over, Madziva executed his plans to perfection and lead Zimbabwe to a 1-0 lead. Zimbabwe defend 170, after India were cruising for 19 overs of that chase. It was Pandey and Dhoni's stand that got India back into it and in control, but Zimbabwe chipped away and eventually just had enough. The discipline was probably lacking through the middle, but certainly not in that last over. That sets it up for the rest of this series.

Elton Chigumbura is the Man of the match: "Good effort from the whole team. Everyone contributed today. This one will give us the confidence to do the same thing again, and improve."

Graeme Cremer: Excellent to come back from the losses in ODI series. A lot of pressure off me. We are not going to stop here. We know Elton can always be dangerous. He is one innings away from doing something special again. today could have gone either way.

MS Dhoni: Ultimately, the contest is between the bat and ball. I felt the last ball was brilliant. we did not play to potential. A lot of wickets were not full-fledged shots, more like catching practice. you may be doing well in the domestic circuit but there is more pressure when you go from India A to India. Good learning curve for them. Lots of errors committed by the batsmen, We were not playing with out first XI in the bowling department. Our lengths were not right."

19.6
1
Madziva to Dhoni, 1 run, straight to deep point. Zimbabwe have won. Full and wide outside off, like how everyone anticipated. Dhoni reaches out for it and can only find the fielder. Exceptional bowling that, what an over. Madziva, despite a bad call in that over, has defended 8. Amazing scenes as the crowd goes wild, Ntini joins in the celebration

Right then, it all comes down to this. 4 off 1. Dhoni on strike. Three inside the leg side. All out on the off side, Dhoni knows where this is going to be

19.5
1
Madziva to Dhawan, 1 run, full and wide outside off, scythed to third man for a run. Dhoni is happy with the single
19.5
1w
Madziva to Dhawan, 1 wide, awful decision that. Full and wide outside off, way outside the tramline but Dhawan was way across. He was probably standing on that tramline, could have easily got bat on that. Ump Tiffin. Bad call
19.4
0
Madziva to Dhawan, no run, excellent yorker. Dhawan walks across, trying to go over the leg side but the yorker is perfect. Lands on the wide tramline but Dhawan could have reached that. Ends up leaving that alone

Dhawan and Dhoni have a chat. India are one hit away but have only three balls to find that/ Square leg is up. Deep point in place

19.3
1
Madziva to Dhoni, 1 run, yorker outside off, driven to cover. Not much even Dhoni can do about that.

Did Dhoni cross? Course he did.

19.2
W
Madziva to Patel, OUT, gone. Straight to long-off. just to add to the tension and drama. Overpitched outside off, quite a terrible delivery, but Axar just cannot get under that enough. Smashes it straight to long-off. Enough power but not enough elevation

Lots of chat between the bowler and captain

No. of consecutive T20I wins for Zimbabwe against India. Before this 2-run win, they had defended 145 at this same venue last year.

No. of times India had lost a wicket off their first ball of the innings in T20Is, before this match. KL Rahul was out a first-ball duck making his T20I debut.

No. of fifties completed in fewer balls than Chigumbura's 25 in this match among Zimbabwe players - Waller (20), Chigumbura (21) and S Williams (20)

Average score for Zimbabwe in the ODI series - 417 runs in 3 matches. They have scored more than that in this first T20I.

No. of T20Is where 5 or more players made their debut for India, before this match (excluding the first T20I where all 11 were debutants).