Near the end of spring training last year, the opinion among then-New York Yankees manager Joe Girardi and his coaches was unanimous. According to GM Brian Cashman, Girardi and his staff believed 20-year-old super-prospect Gleyber Torres (now 21) should start the season as the replacement for injured shortstop Didi Gregorius. But Cashman disagreed.

Cashman used his veto power to quash the idea; Torres had no experience above A-ball, had never played in cold weather and was excluded from the 40-man roster at the time. Still, Cashman believes in Torres' ability.

“He has a chance to be an above-average everyday player at the major league level,” said Cashman, who had acquired Torres as the centerpiece of the Aroldis Chapman trade with the Cubs in July 2016. 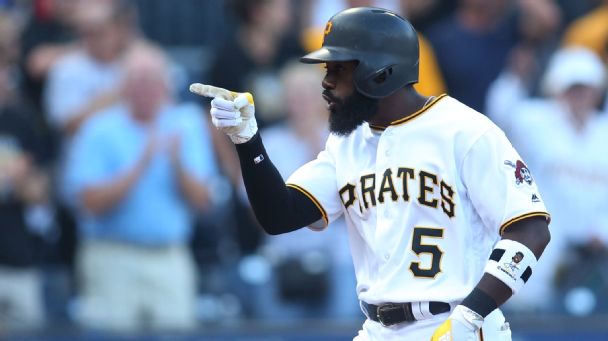 1. Gleyber Torres: Torres' talent will allow him to break camp as a starter amid dreams of Derek Jeter in '96.

2. Josh Harrison: The Yanks and Pirates will finally come together on the Gerrit Cole trade, adding Harrison to sweeten the pot -- even though earlier reports on a deal being close were inaccurate, according to sources.

3. Ronald Torreyes: Torreyes could be a short-term answer, but the 5-foot-7 dynamo doesn't get on base enough to be the long-term solution.

4. Eduardo Nunez: The free agent could return to New York if he's looking for a pillow contract -- a one-year deal to re-establish his market value. Though he might be able to get multiple years elsewhere.

5. Tyler Wade: Wade has potential to be on the roster, but, at this point, he doesn't seem like an internal favorite over Torres -- though he might have a shot at Torreyes' spot.

1. Todd Frazier: Frazier was a good fit, but the salary and length of contract he'll likely command is not.

2. Manny Machado: The trade rumors were nice while they lasted. Now we wait until next offseason when he's scheduled to become a free agent.

3. Alex Rodriguez: Who says no?

Now, Torres might be the favorite to start the 2018 season as new manager Aaron Boone's second or third baseman. Nearly all the scouting experts agree on Torres' talent, with ESPN's Keith Law placing Torres second overall in his prospect rankings last year.

With the trades of second baseman Starlin Castro and third baseman Chase Headley, the Yankees have created two holes that, at the moment, would be filled by a combination of Torres, Ronald Torreyes, Tyler Wade, Miguel Andujar and Thairo Estrada. Besides Andujar, who sticks strictly to the hot corner, all can play either position.

“We are currently set up to go this route, unless something presents itself between now and whenever that gives us a change of position," Cashman said.

It's a pretty good bet Cashman acquires a veteran infielder before spring training starts next month. In trades, Cashman could bring in the Pirates’ Josh Harrison or the Cardinals’ Jedd Gyorko. Among the free-agent options, someone such as former Yankees Eduardo Nunez or Yunel Escobar could be a fit. The Yankees would like to bring back third baseman Todd Frazier, but the length and size of the contract he wants might not square with the Yankees’ goal of ducking under the $197 million luxury-tax ceiling.

If Cashman adds one of those players, it still leaves Torres primed to grab the other infield job, even though his Triple-A season ended early last June when he required Tommy John surgery on his non-throwing left elbow. He's fully healed, and is expected to start spring training with no restrictions.

The Yankees won't ask him to become a star right away, even if he breaks camp with them. The job for any of the candidates in 2018 is simply to field the position competently, because the Yankees are stacked offensively at every other spot, from reigning Rookie of the Year Aaron Judge and National League MVP Giancarlo Stanton in the outfield to Gary Sanchez behind the plate and Gregorius at short, not to mention first baseman Greg Bird and veteran outfielders Aaron Hicks and Brett Gardner.

The rest of the lineup would, presumably, take some pressure off Torres if his highly touted bat isn't completely ready -- as long as his defense is up to par.

“Every time you are breaking in someone new, you are not asking them to be the guy,” Cashman said. “Ultimately, if you are bringing in a young rookie, whether it is pitching in the rotation or pitching in the bullpen or being a potential everyday position player, they are not going to be the ones you are leaning on. You are turning to the other, more experienced players to be carrying the load, while the young players are getting their sea legs under them.”

Among those vying for the two open spots, Torreyes, 25, has the most experience. As the 25th man the past two years, he has managed to remain on the roster throughout each season, never being the odd man out for a pitcher. He's a contact guy, a .282 hitter over 476 career at-bats, with just 64 strikeouts. He almost never walks, though, as his .313 on-base percentage demonstrates. Still, he's not a bad option.

Wade, meanwhile, has drawn comparisons to Ben Zobrist. Just 23, Wade grew up idolizing Derek Jeter, but has been very amenable to moving from shortstop to a jack-of-all-trades role. Wade looked overmatched at the plate in his MLB debut, managing just nine hits in 58 at-bats (.155) last year, though that's certainly not unusual for prospects their first time through the league.

Estrada, 22, is another strong shortstop prospect but looks like the longest of shots. The Venezuelan hit better than .300 at Double-A Trenton and in the Arizona Fall League. He's a talent, but it seems a bit of a stretch that he'll be able to jump over the others this spring. As for Andujar, also 22, his bat might be ready, but his glove likely needs a little polish, which means he probably won't be the answer to begin the season either.