The New York Yankees could be rolling out a long run of Rookie of the Year contenders. It might become an annual event.

Before you bookmark this page for future trolling, allow me a quick caveat: Nobody knows how good any player in the Yankees’ fine crop of minor league talent will become. There might be more Ruben Riveras than Mariano Riveras.

The Yankees now belong to Sanchez 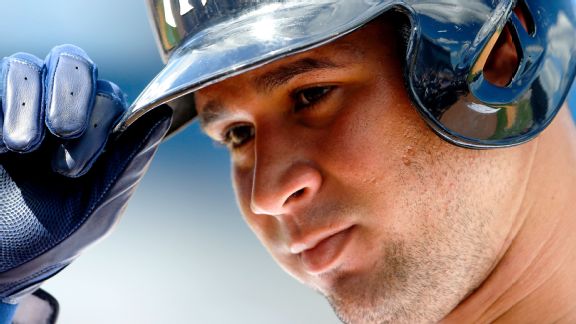 Once, he was a teenager who looked up to Derek Jeter. Today, the backstop is the face of the Bronx Bombers. Will Gary Sanchez be their next captain? Marchand »

• Judge 'a freak' -- but will he be a star?
• Baby Bombers put vets on notice
• Is Joe Girardi having fun yet?

Still, with manager Joe Girardi’s giddy speculation that this collection could be more talented than the early to mid-'90s group that resulted in the Core Four plus Bernie Williams, there is a feeling the franchise might have something special going on.

Last year, catcher Gary Sanchez was the runner-up for the Rookie of the Year award largely because he didn’t spend enough time in the majors. Aaron Judge, newly minted as the team's starting right fielder, is next up. He begins the season as the Yankees' top rookie. But he's not alone; a progression of talent is set to follow him.

Next year, shortstop Gleyber Torres could be the man. In 2019, it might be left-hander Justus Sheffield. In 2020, it could be outfielder Blake Rutherford. And it goes on.

These young guys might push themselves to the majors earlier than that and compete with each other for the rookie award. The Yankees also have players such as Clint Frazier, Jorge Mateo, Chance Adams, Jordan Montgomery and Tyler Wade fighting for their turn.

To repeat, there are no guarantees. Judge struck out 42 times in 84 at-bats last year, which is beyond awful. If you say he'll be back at Triple-A by the end of April, it wouldn't shock me. Judge, though, is an interesting case for Rookie of the Year -- because if he is pretty good, he is going to be a huge star. He is 6-foot-7 and 275 pounds. He is built like a professional wrestler or a defensive lineman. He comes across as polite, which, if he performs, will allow his size to be his defining quality.

If he doesn’t perform at the big league level and Frazier rips it up at Triple-A, then the redhead with "legendary bat speed," according to GM Brian Cashman, could get a shot instead. Of course, both would have to compete with this year's AL Rookie of the Year favorite, Boston Red Sox left fielder Andrew Benintendi.

Torres could move his timetable up, too. Even with the injury to Didi Gregorius, Torres never had a legitimate shot to the make the big league club out of camp. The Yankees want to do everything right with their 20-year-old gem, which means not rushing him from Class A to the majors. He will begin this season at Double-A Trenton, his first experience playing in the cold. If he masters Double-A and Triple-A, he could be in the Bronx at some point this season, playing anywhere in the infield other than first base.

First base is held by Greg Bird, who would be yet another ROY candidate if he hadn’t made such a nice debut in 2015, hitting 11 homers in 157 at-bats and posting an .871 OPS. Bird looks like a budding star. He and Sanchez will bat No. 2 and No. 3 in the Yankees' batting order.

It's an impressive group, and a deep one. That is why Judge might be the Yankees' latest Rookie of the Year candidate, but he's almost certainly not the last.